On Valentines Day we treated ourselves to a tour of Necker Island, an exclusive, eco-friendly, private island that is owned by Sir Richard Branson. The island can accommodate up to 40 guests who can stay on this island for $64,000-$78,000 a night, (yes, per night) double occupancy.

Necker Island is located just North of Virgin Gorda. Sir Richard Branson purchased this 74 acre island in 1978, when he was 28 years old. It was listed for 6 million dollars and he made a low ball bid of $150,000, because that was all he could afford at this point in his career. His offer was turned down and he was asked to leave. After a few months the owner needed some immediate cash and since Branson was the only person to make an offer they settled on a sales price of $180,000.

Today, Sir Richard uses this island as his main residence and a nature preserve with over 140 different species of animals. Only a few tours are done each month and these tours are usually booked months in advance. I didn’t even try booking a tour in advance because we weren’t sure exactly when we would be in Virgin Gorda and usually if Rich and I plan something, something else gets in the way. On the morning of February 14th, I saw on Gumption’s Tours website that there was a Valentines Day tour, so I sent an email asking if there was room on the tour for 3 last minute guest. Surprising, Gumption wrote right back and said, “YES, There was room on the tour for that afternoon.” I was shocked!!

Gumption came to our boat and picked us up in his glass bottom boat around 2:00pm and we made our way across to Necker Island. Here are pictures of us on the dock. 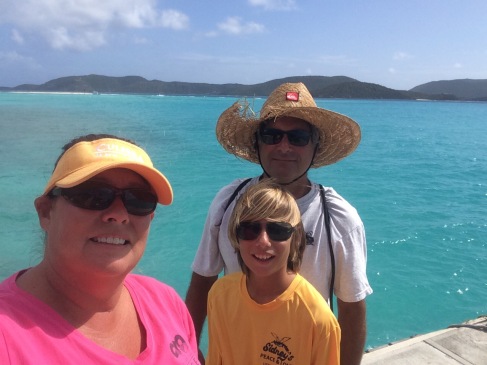 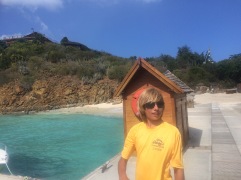 Once we were docked Gumption lead the way as we walked around the island. 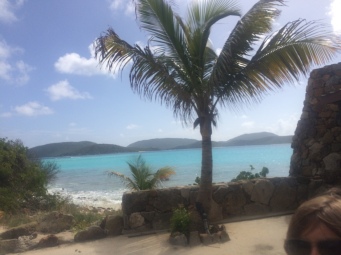 The first stop was the Lemur area. Before we entered the area we had to sign a release that released Necker Island and Richard Branson from any injury’s that occurred from the Lemur’s, but they were very cute little things that just wanted you to feed them food. 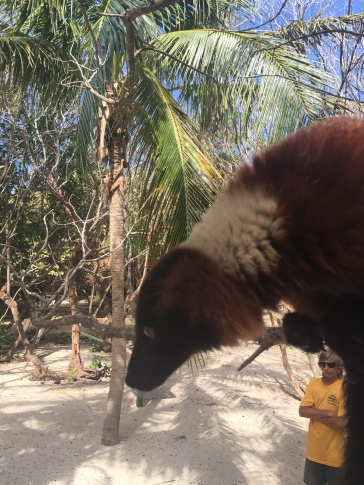 They also loved camera’s and almost knew they were getting their pictures taken. 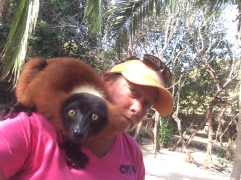 Tyler was a little hesitant and didn’t want one on him and he kept his distance for awhile, but then he had no choice when one jumped on him. 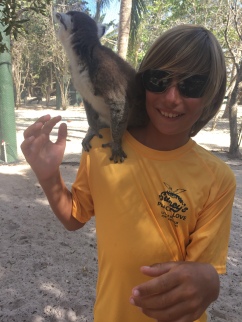 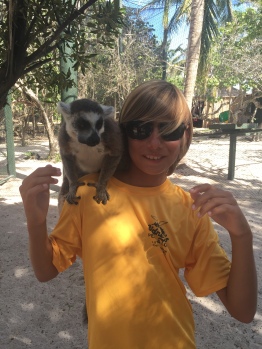 Unfortunately, I stood under a Lemur that had a little too much to eat. YUCK!!!

The Lemur’s are an endangered species and according to Gumption there are no longer any Red Ruffed Lemur’s living in the wild…. which is very sad. They are not monkey’s, but a species all their own. Sir Richard Branson is successfully breeding Lemur’s and helping the endanger species increase their numbers. When Madagascar’s government improves their hunting and poaching laws he will send some of the Lemur’s back to their original country and have programs in place to help them get back into their native environment.

After the Lemur area we continued our walk around the island. We saw all kinds of birds that have been rescued from around the world. 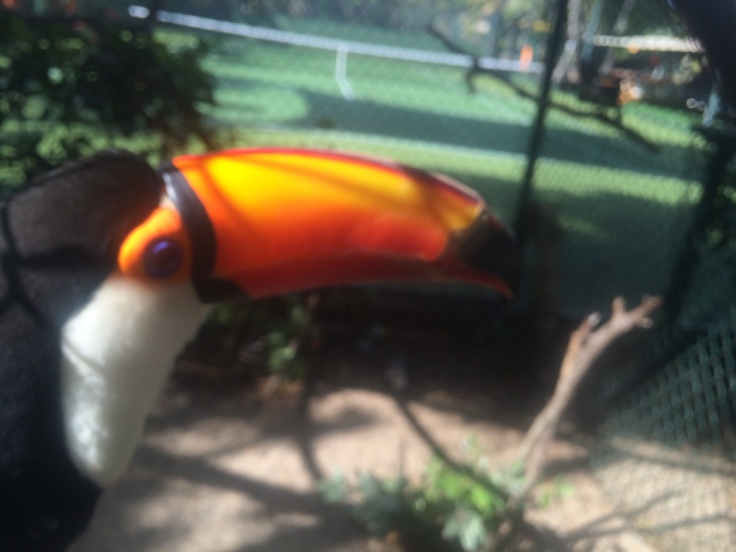 We walked past the dining and sports room along the beach.

During our walk we saw several giant tortoises just wandering along. 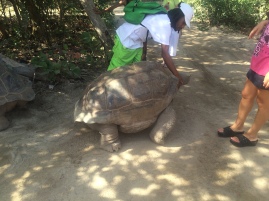 Richard Branson’s private residence sprawls along one of the highest peaks on the island. 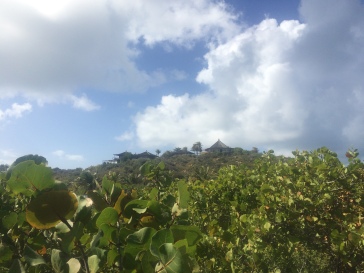 His office is the building on the right, then the kitchen area, the dining/living area and then the bedroom suite on the far left.

We also walked past a guest house that has hosted Princess Diana, Michael Jackson, Mel Gibson, Bono, and recently Prince William and Kate. These are just a few of the people who have come for a quiet relaxing holiday on the island. 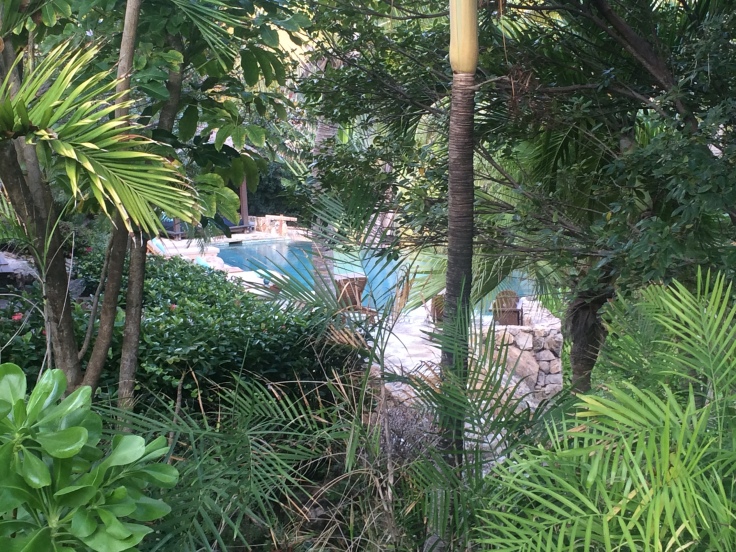 Before we were allowed on the island we had to sign a photo/social media disclosure because someone very famous (who they would not name) was currently staying on the island with their entire family. We had to sign a release stating that if we saw any guest on the island that we would not take their picture. Our tour guide, Gumption, had to enter every area first to make sure the guest or any family member was not in the area before we entered it.

Every guest house, walkway, and building on the island charmingly blended in with the natural landscape and was not pretentious or obtrusive in any way. Even the flowers and landscaped areas looked natural and not overly manicured or maintained.

We walked down a natural trail to a beach on the North side of the island. Next to the beach was a large patio area, with a fire sculpture and bar area which was facing the beach, but behind the bar area was a salt pond that was home to several types of colorful birds including a Flock of Flamingo’s and Scarlet Ibis’s. 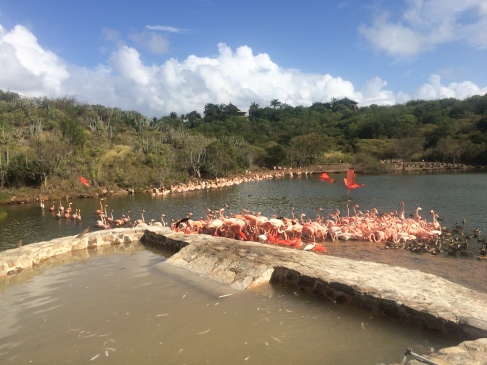 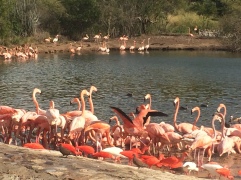 The grey birds on the other side of the pond are the juvenile Flamingo’s that have not turned pink yet. The Flamingo’s are thriving so well here, that there are 175 juvenile’s this year. Each Necker Flamingo is tagged and they have turned up in flocks all through the Caribbean and as far South as South America. I really can not think of anything much more awesome than sitting on your beach, on your own private island, sipping a drink and watching your flamingo’s …. Well done Mr. Branson. Well done!!
After we watched the Flamingo’s we headed for …. wait for it …. The Gift Shop, of course!! We did not buy anything, but if you go and want something, expect to pay a very pretty penny for it. We decided the view outside was much better. 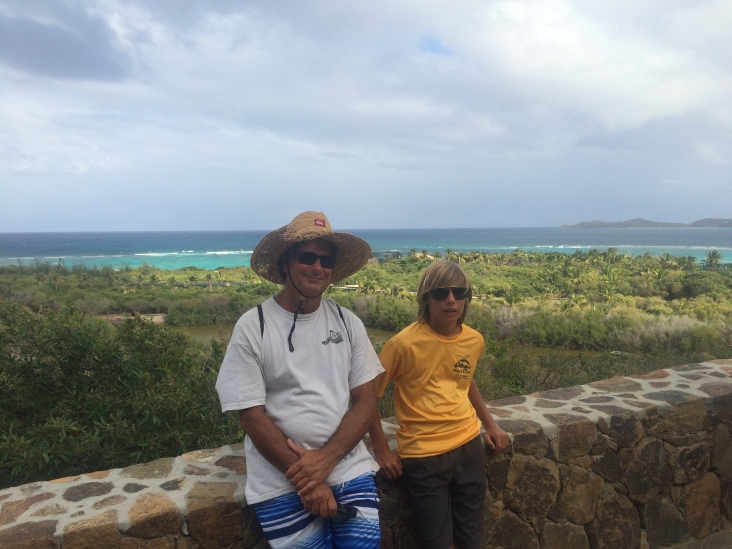 After the stop at the gift shop we went back to Gumption’s boat and he brought us back to Sail Pending.

One thought on “Necker Island”