Kaycie wanted to visit St. Barth during her visit, so from Grand Case we sailed SE around the northern end of St. Martin and headed for St. Barts. It’s only about 15 miles away and we sailed the entire way, but 4-6 foot (and occasionally bigger) waves crashed over the side of us for 3 1/2 hours. Needless to say, it was not a very pleasant ride, but everyone voted to keep going.

Once we arrived in the main port in the town of Gustavia, we found a place to anchor and headed to town to check into customs and then take a leisurely walk around town and grab a bite to eat. But, it was around 3pm, and we discovered that most of the bars and restaraunts were closed for several hours until their dinner opening. 😟 ugh!!

So, we just went back to the boat and rounded up some leftovers and enjoyed an early dinner from Sail Pending. We were pretty tired so we watched the sunset, played a game and went to bed.

The next morning we were up early and we decided to rent a car and explored the island. Our first stop was the town of Lorient, where JB owned a hotel in the 70’s and wrote a song about it. We found a cute little bar on beach with a great view, just outside of the town.

We also drove around the island and here are some of the awesome views. 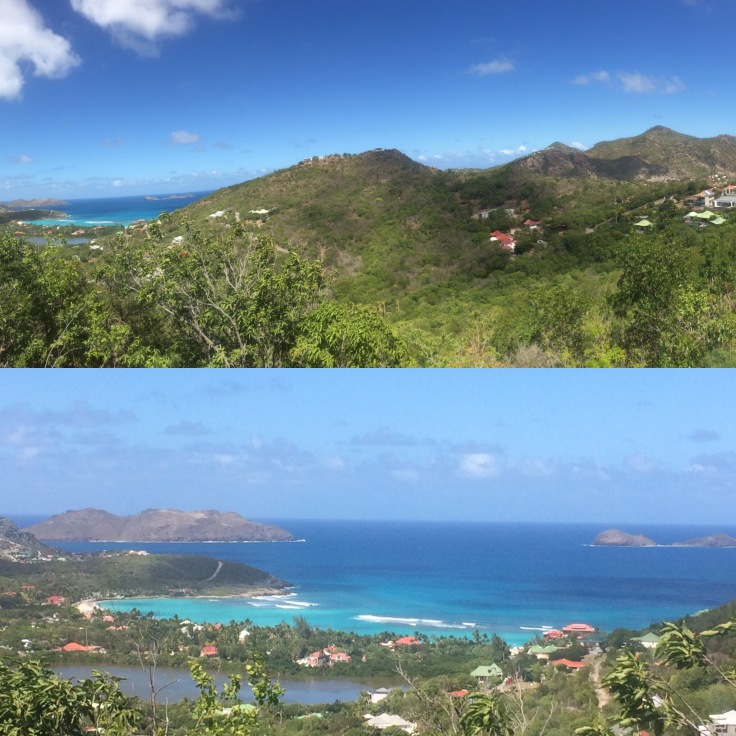 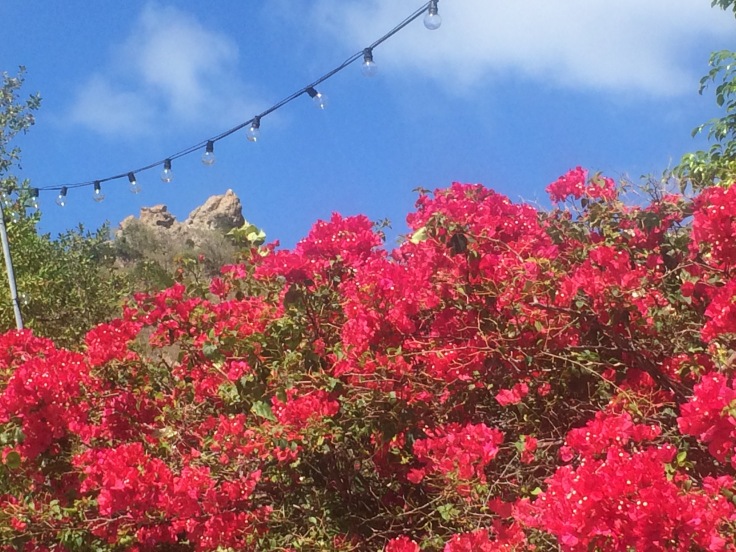 After our drive around the island we went back to Gustavia and ate lunch at La Select.

La Select is the inspiration of JB’s song “Cheeseburger in Paradise.” Of course, we each had cheese burgers, although we weren’t very impressed with them. We’ve had much better cheeseburgers other places and kinda thought this place was a tourist trap. 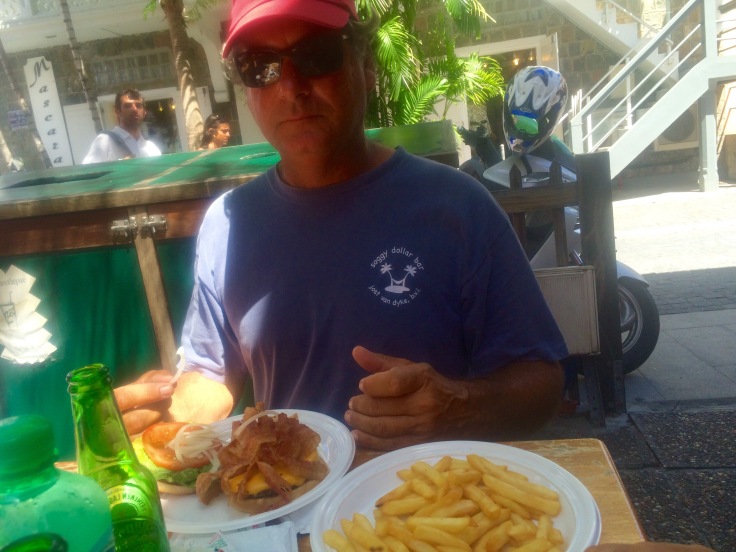 Our rental car parked in Gustavia.

But, to us the most exciting part of Gustavia was watching the airplanes land!!! St. Barth airport has one of the most dangerous final approaches of any commercial airport in the world. The gap in the hills make the approach very windy and there are several obstacles that the planes have to maneuver around. To top it off the runway is very, very short.

We’ll upload a video of a couple planes landing when we have good wifi.

We returned our rental car in the early afternoon and purchased a couple baguettes and cheese for dinner. We dingyed back to Sail Pending and repositioned her to an chorale around the corner called Anse de Columbier, which is a much quieter and calmer anchorage than Gustavia. 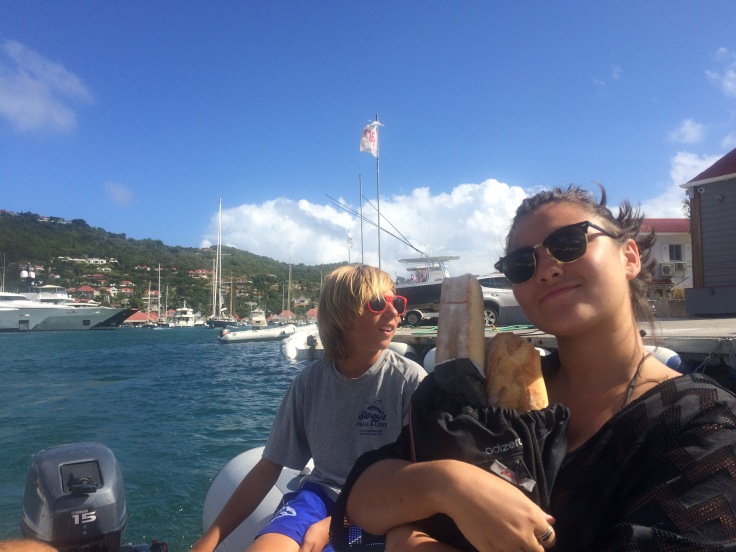 Our delicious sunset dinner once we were moored in Anse de Columbier. 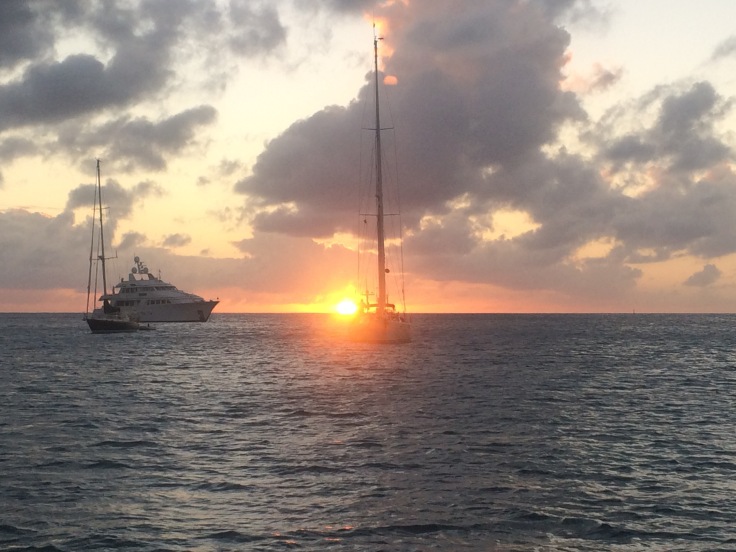 The next morning we woke up had a quick breakfast and took a walk to check out the beautiful beach we were moored just off of.

As you can probably guess, we are becoming huge beach snobs by now. A beach has to be breathtaking and relatively private for us to spend any time there. 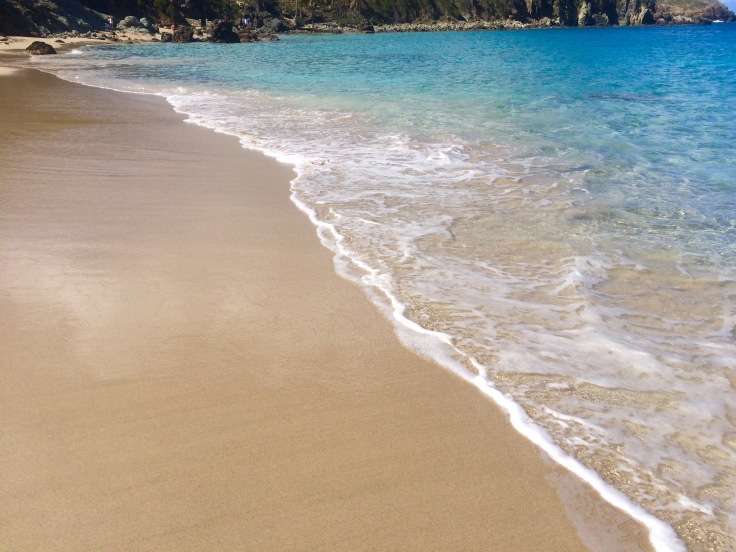 The anchorage/mooring field at Anse de Columbier is pretty spectacular and this anchorage is one of the most beautiful that we have visited yet. So, far it’s one of our favorites.

We look for 3 things to rate an anchorage on and Anse de Columbier gets 5 stars on all 3!!! 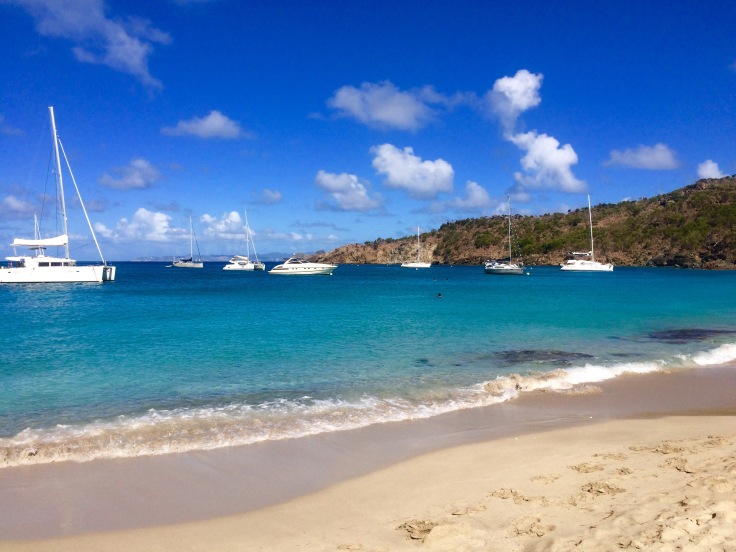 One of the things that makes this beach special is that it is ONLY assessable by boat or a very long hike from the town of Columbier. So, there are very few people.

#2, hiking and areas to explore 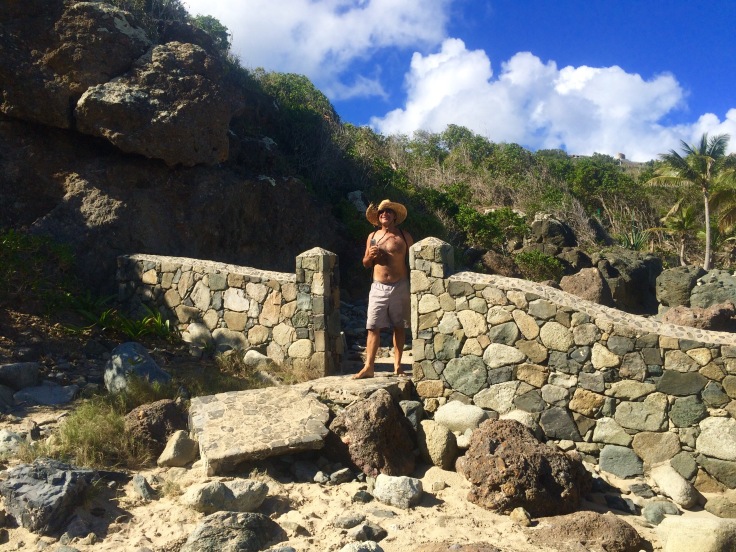 There is a stone fence that surrounds a run down, vacant house on the hill.  The stone fence is starting to fall apart too. But, it’s a charming addition to the one side of the beach.

There is also a stone walkway from the house going into the water.

These were the steps leading to the house. 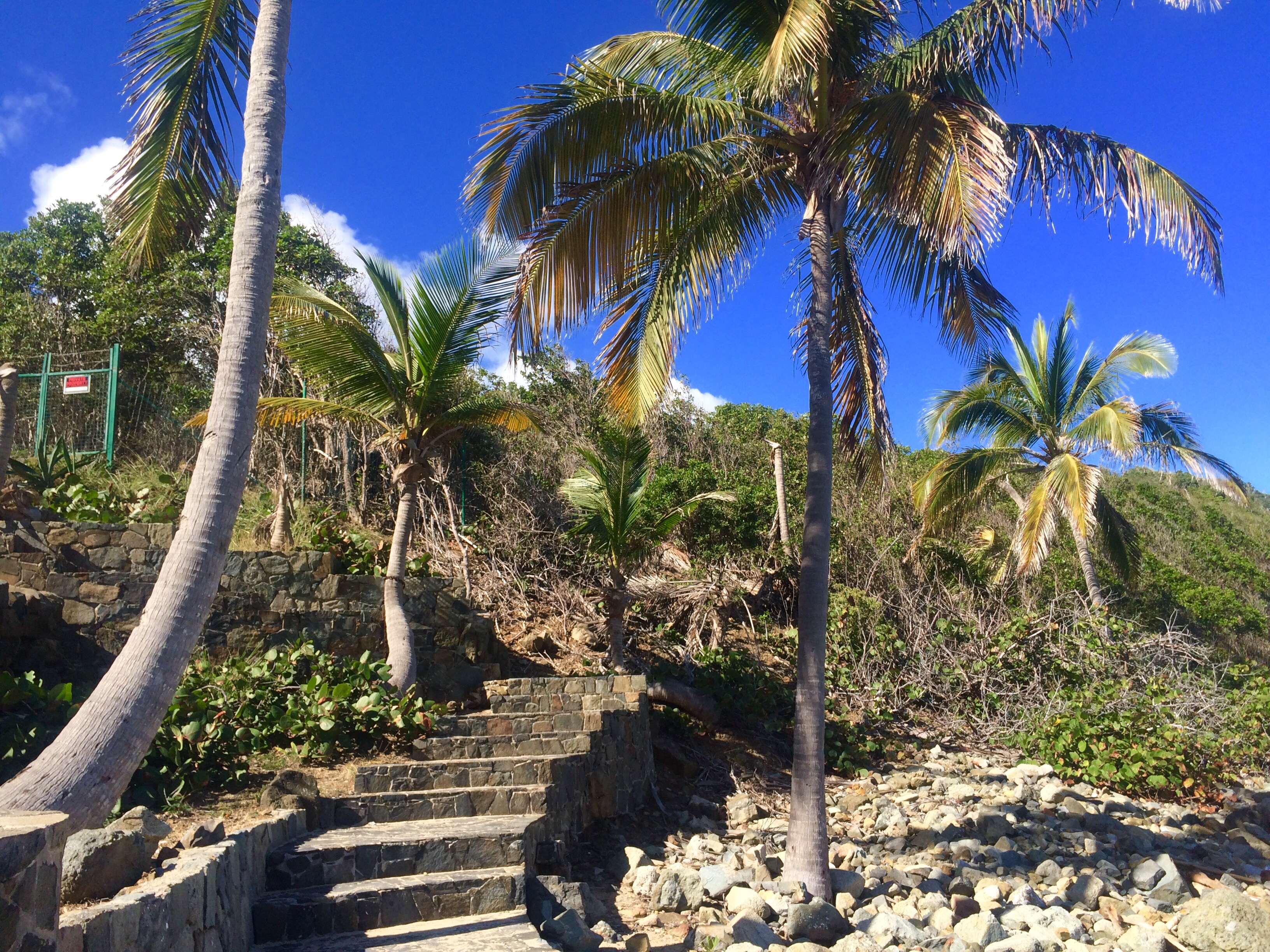 More pictures from the Southern side of the beach 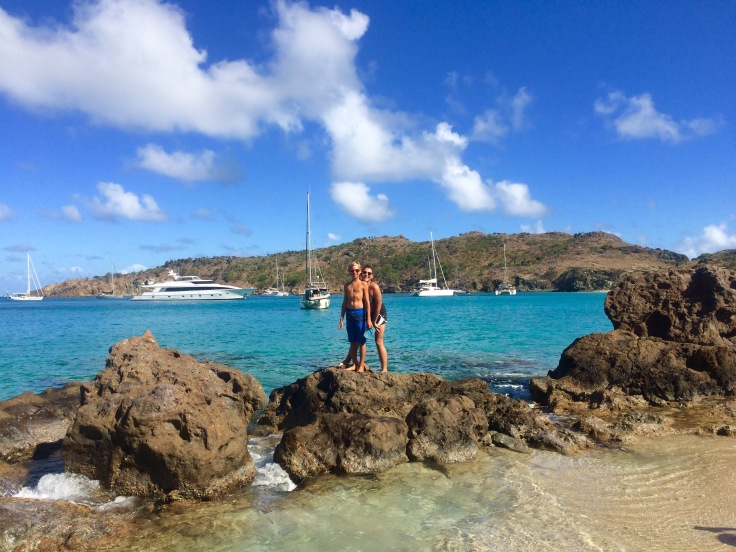 On the Northern side of the beach there was another stone stairway that went up a steep hill.

The steps lead up to the hiking path that takes you to the town of Columbier and the view was pretty amazing. Here is the view looking into the anchorage.

Rich and Kaycie walking up the steps.

Once at the top you can also see across into the sea on the other side. 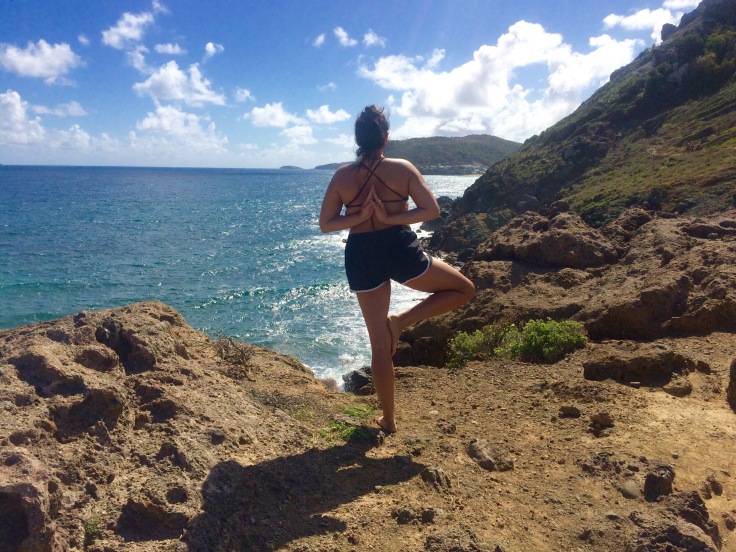 The amount of turtles we saw in this anchorage was insane!! As we looked around the boat there was almost always a sea turtle in sight. At one point we counted 7 turtles who surfaced at the same time.

There were also a ton of starfish 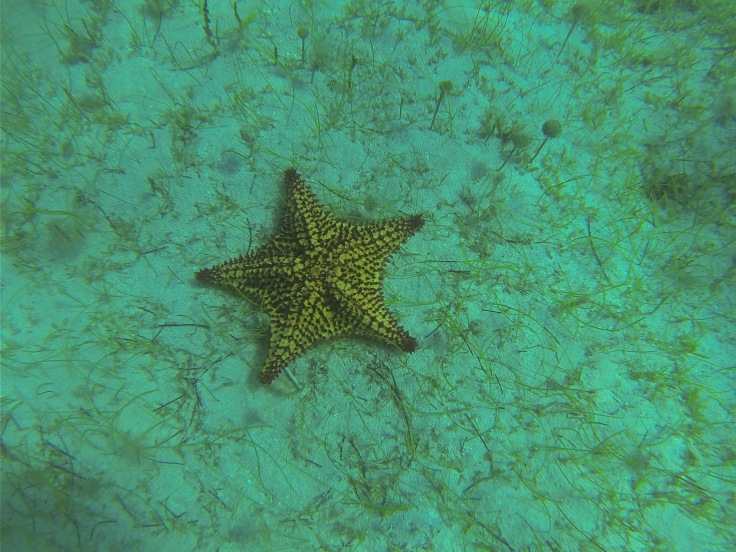 There were also some squid and an octopus who was camera shy.

So, Anse de Columbier will be an anchorage that we’ll return to soon.

Overall, St. Barth was a fun few days but we have to get Kaycie back to St. Martin for her to catch her flight home.