We hired a local tour guide to take us to the Frigate Bird colony in the Codrington Lagoon. There were 1000’s of these magnificent birds.

The white birds are juveniles.

The males have a red pouch that they inflate to attract females.  They will also do a little dance and sing to impress the lady’s.

It was the very end of the mating season and there was only one poor guy left, waiting for a mate. The females are the ones who choose a mate and he was just sitting there waiting and waiting. He reminded us of being the last one chosen for a team in gym class and we felt really bad for him.

Once the males have been chosen and have mated with a female they fly away to another colony and mate again. The Frigate Bird colonies are located in only 3 places. The males will fly from Barbuda, to The Galápagos Islands to Key West and then back to Barbuda. The females stay in one location and take care of the juveniles and teach them to fly and fish.

Frigate birds weigh only 3-4 pounds each but have a wing span of over 6 feet, which makes their glide ratio huge. They will glide miles with only one flap of their wings.

Here is a video of sitting in the middle of the colony. Click this link

The day after we toured the Frigate Bird Colony we decided we’ve seen enough of Codrington and want to check out the anchorage on the Southern side of the island called Gravenor Bay.  This secluded Bay was absolutely spectacular!!!

The dark spots (in the picture above) are small reefs.

When we arrived, we were the only boat around. We had the entire anchorage all to ourselves!!

Our first day in Barbuda the Security Guard at the airport told us about a dock that was near here where the fishermen brought their Lobsters to sell. So, as soon as we anchored Rich headed to the dock. He came back with 2 Lobster, a Grouper and a Snapper all for $100EC or $40.00 USD

The water was the clearest that we have seen yet. The anchorage was so peaceful that we decided to stay a second night. We spent the extra day snorkeling, kayaking and just enjoying the tranquility of the water and privacy. In the late afternoon, a fishing boat came by selling more Lobster.  So, Rich purchased several more and we spent the remainder of the afternoon cooking and cleaning lobster to fill up our freezer.

… and cleaned every bit of meat out of them to put it in the freezer. 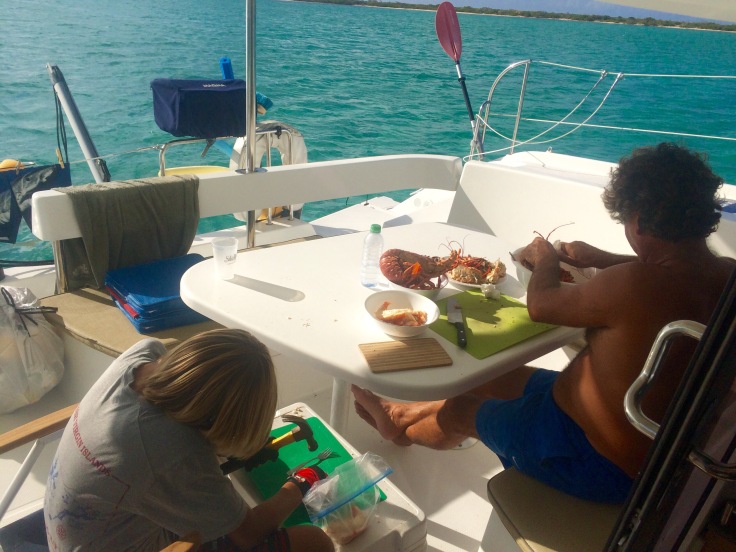 We absolutely LOVED Barbuda and this little bit of unspoilt paradise is on our list of islands to come back to as we travel North next year.