One of the main reasons we sailed to Vieques was to experience the Bioluminescence Bay on the South side of the Island. The bay is unique because the Bioluminescence Plankton get trapped in the bay and can not get out. There are 750,000 of these bright Plankton per gallon of water. Imagine several thousand fireflies in a gallon container….. NOW, imagine that glow in water!!!

The Bio Bay in Vieques is the brightest Bio Bay in the world because of the Red Mangroves that grow along the outside of the bay. The Mangroves drop their leaves which decompose in the water and this creates a very high concentrate of Vitamin B-12 which allows the plankton to reproduce and thrive.

Disclosure: I did not take the following pictures. We do not have a waterproof camera that has a special shutter feature. SO, I found pictures on the internet that best portrayed what we saw.

The Bay glows every night, but several things will make the bay brighter;

We had all 4 of these and they guides told us that they were expecting the Bay to be spectacular!  Just as we were riding in the van to the Bay it stated to drizzle and more than half of the tour group left because they didn’t want to get wet.

As we got into our kayaks and headed out across the Bay the sky let loose and it was a downright downpour with some of the biggest raindrops that we have ever seen. 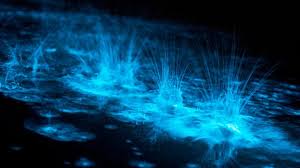 Every raindrop that hit the water made the water glow!! Even the tour guides that do this tour every night were hooting and hollering. They were even amazed with what they saw. The entire Bay glowed with sparkles and it was one of the most amazing experiences that any of us ever witnessed!!! Every single one of us on the tour were soaking wet, but we didn’t feel a thing with the amazing phenomena happening around us. We all just floated there clapping and cheering and then the rain stopped and the bay was dark again except for what we were disturbing in the water around us….. A few minutes later it happened again, but this time we could see the line of glowing rain drops moving towards us from one side of the Bay to the other; not only did we witness this rear occurrence once, but twice!!!

We paddled and floated around the Bay for about an hour watching the fish disturb the plankton as they glowed underneath of us. As we took a handful of water and poured it back into the bay every drop glowed. Anything that touched or disturbed the water underneath us glowed.

If you ever get to visit Vieques, DO NOT miss taking a tour of the Bio Bay. I have witnessed a lot of really unique experiences in my life, but this ranks up as one of the coolest things I have ever seen.

One thought on “Bioluminesant Bay Tour”