After a pleasant 3 hour sail from The Saintes, Guadeloupe, we arrived in Portsmouth, Dominica. As we were pulling into the anchorage our friends on Time Out, radioed us and said they were just pulling in, as well (they were arriving from Martinique). Our other friends on Escape Claws have already been here for a few days.

We quickly got anchored and dingied ashore to clear customs. After we cleared into Dominica, we met up with Time Out, at Sandy’s Beach Bar. Since we haven’t seen them since St. Patty’s Day on Monserrat, we caught up over a few cold beers while the kids played on the beach.

Luckily, it was an early night because we had a tour to the Syndicate Rain Forest with Spesh the next day.

On the drive to the forest we drove by a Bridge that was destroyed by Tropical Storm Ericka, last year.  A new bridge was rebuilt with the help of the French and British governments. 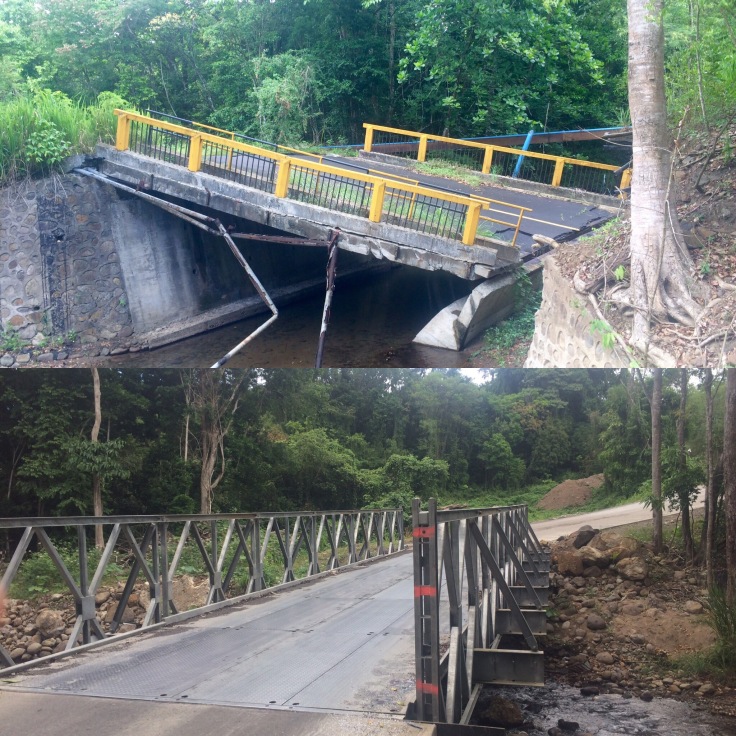 Spesh kept us all entertain with the stories of his family history. His great, great grand fathers and 2 of his brothers escaped slavery from a plantation in Guadeloupe and came to Dominica.

He also told us some interesting facts about Dominica.

Dominica has 12 volcanos; 9 on the island, 3 in the sea just off land.

Dominica has 177 different species of birds including the Sugar Bird. (Couldn’t get any good pictures). The Males birds will make a nests and the Female will choose who’s nest to lay her 3 eggs in. When the 3 eggs hatch there will be 2 male baby birds and 1 female baby bird. The two male baby’s will fight until one die. Survival of the fittest at its best!!

As you can see the kids were intrigued by Spesh’s story’s about the island’s history and the different flora and fauna. They all listened attentively and asked some great questions. School for today is done. Yea!!!

Then we hiked into the forest where there are over 1000 varieties of hard wood trees. The bridge below was built out of a Karapit Tree.

They do not cut down any of the hard woods here on Dominica, because they don’t want to destroy the forest. The wood can only be used if it has fallen naturally. This tree fell in 1979 when Hurricane David hit the island. Notice, in the picture below, that the stumps and logs have not rotted or been eaten by ants or other insects. This is a pretty solid wood.

Spesh says the bridge will last over a hundred years. He also told us that the wood is so hard that it will break a normal drill bit.

Another hardwood tree is the Chatannye Tree that was used to communicate before telephone or other modern forms of communications. People would bang on the roots and it sounds like a large drum that can be heard miles away. 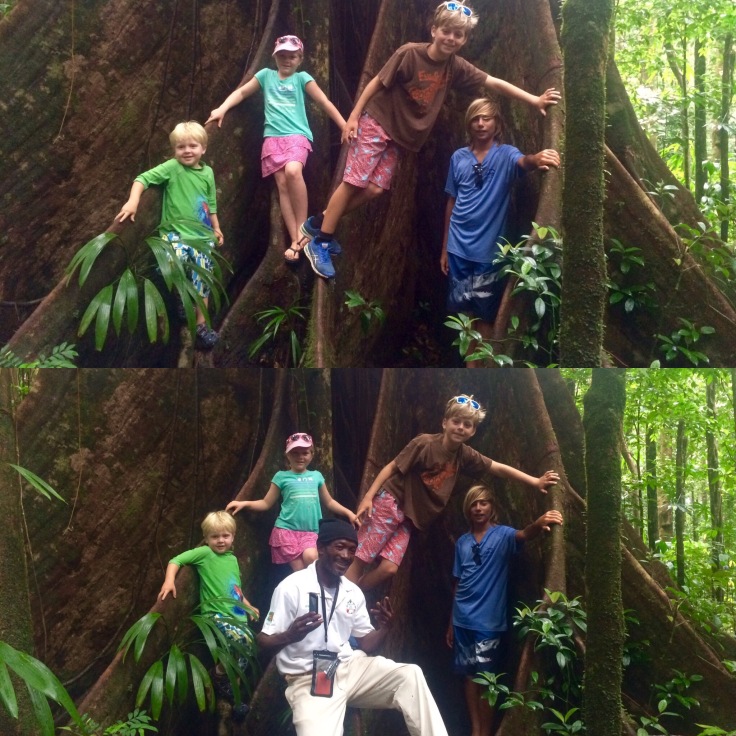 Spesh showed us how to use the gum from a ?? tree root to make a fire (top picture below) and how to follow the roots of a ?? tree to find water (bottom picture below). Sorry, I don’t remember what the trees were called. 😳

There are 12 different species of orchids and thousands of other tropical flowers that grow wild on Dominica. Here are a few pictures of the wild flowers we saw today.

Spesh showed us how he and other local people set traps for local game. He took us to check his trap which is a large hole dug into the ground with twigs and branches over it to hide it. The animals will fall in and will not be able to escape. 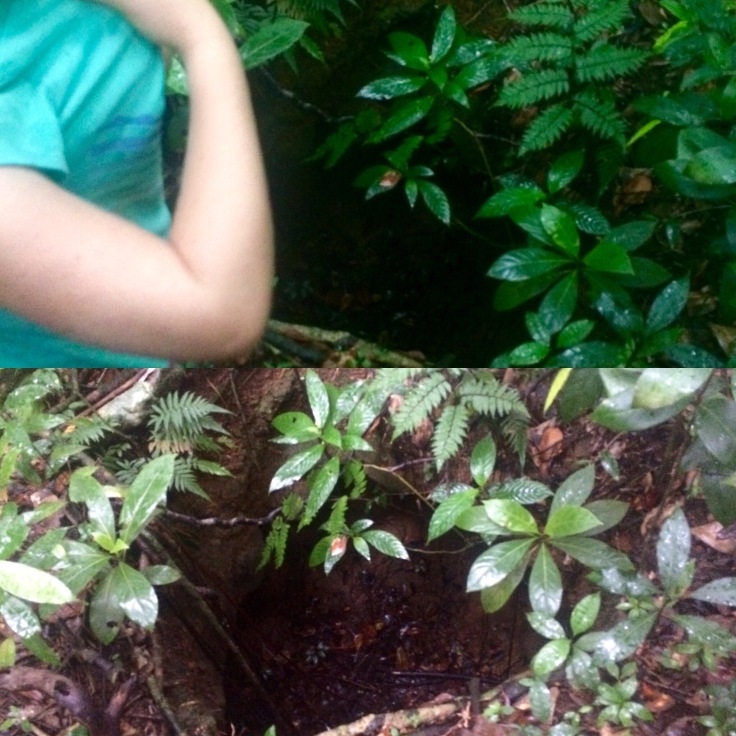 Spesh also showed us a plant which is called “The pearl of the forest.” He broke a stalk open and took out several white seeds from inside that look like pearls. These tiny pearls are known for healing any prostate problems that man might have. He had each of the men eat a couple.

Here is a picture of a birds nest orchid. 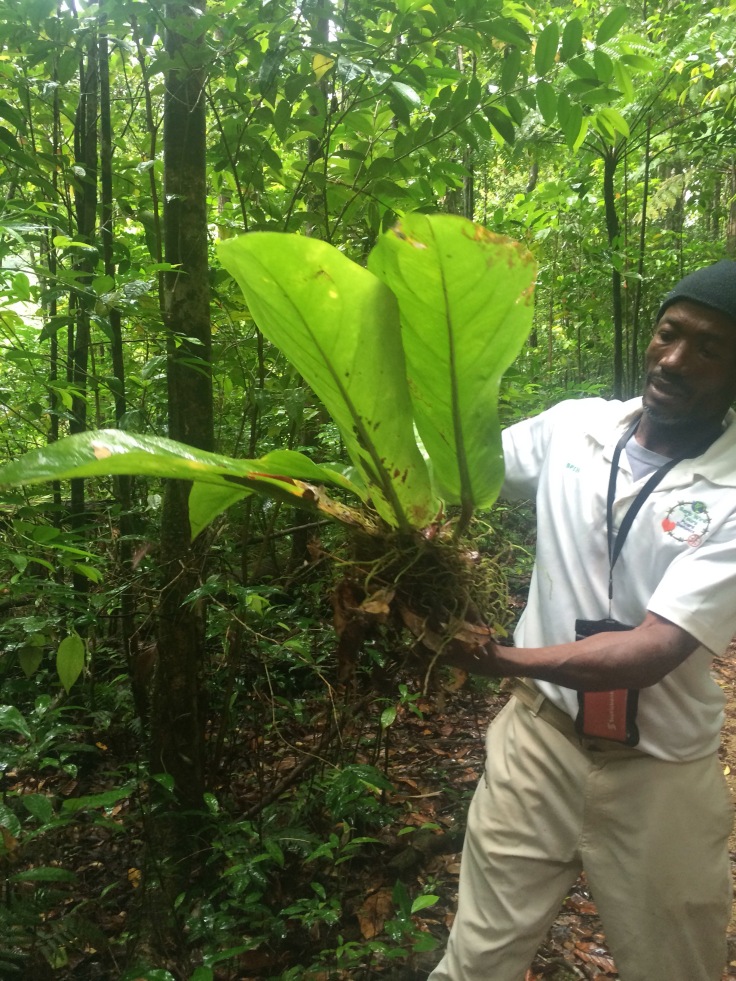 Here is a picture of a Kawi, the parrots open it and only eat the seeds.

We had an amazing morning and we’re getting hungry, but our hike wasn’t over yet. We de ended out of the rain forest and into agriculture areas that raised tropical fruits…. Stay tuned for part two, where we taste the fresh produce of the island.

Video of our walk through the forest
Below are more pictures from our morning hike.